Rock the Parkway Half Marathon

On Saturday, I ran the half marathon at Rock the Parkway in Kansas City. It was my slowest half marathon ever, and that includes my 13.1 times from both half-ironmans. I suspect it was slower than my 13.1 splits from the marathon in my full Ironman. I was not attempting to PR, but I was nervous for this distance for the first time since my first 13.1 in 2007. Having said all that, I still believe that this was my most meaningful half marathon ever. That is because this race wasn't for me.

This past weekend, my father, age 64, ran his first half marathon with me at his side.

To rewind a bit, this all started Thanksgiving 2009. I think I was doing a training run while I was home visiting and I somehow convinced my father to come along. He and I ran through Emerald Hills, up Soest Rd into town and turned around at Rolla Middle School. It was 6.2 miles...a 10k...a nice round number. It occurred to me that he had maintained a pretty decent pace and didn't seem too physically distressed afterwards, so I suggested to him that he could probably finish a half marathon with a little training. He tossed the idea around, and with the occasional prodding from me, he agreed that he would do it.

Well, he didn't really train much, or at all, and the following Spring he entered to run the 10k at Rock the Parkway, a distance he was familiar with and confident he could finish. Needless to say, with no training it was a bit physically taxing for him. Additionally, the weather was absolutely miserable. He ran that one by himself because I was busy PRing my half marathon at sub-1:40.

I can't say that I should have been surprised when he told me after the fact that he didn't think running was for him. I begrudgingly accepted that he had given it a fair shot, but that unfortunately I had not succeeded in converting my father into a runner. At the same time, in the back of my mind, I knew I owed it to him to try again someday. There was still hope.

The following summer, my brother completed his first half marathon and his first triathlon later that Fall. At some point over the course of watching me finish an Ironman and watching my brother do his first races, I suppose my father's brain started revisiting the idea of running. He mentioned to me at one point that he might decide to try a half marathon after all. That was all I needed...the blood was in the water and I was a shark.

I may have brought it up to him every time I spoke to him, but maybe not. All I know is that he signed up for his first half marathon early this year. He began to train...not just sporadically run...but he had a PLAN. Between my advice and online training plans, he pieced together an outline for how to build up to 13.1 miles.

He was initially very faithful to his plan, but I could tell that he was occasionally falling off the wagon. He was having pain. Sometimes during the runs, sometimes after, and sometimes lasting quite a while. I began to have concerns for my father. As much as I wanted to be an inspirational force in his life, I didn't want to injure him with my hair-brained schemes to make him a runner. I didn't want him to break something that perhaps wouldn't heal. I believe his longest run took him up to 9.2 miles, after which he took a break due to the pain he was experiencing. His intention was to rely on only short runs for the next month until raceday. As it turns out, he did almost no training for the last month before the race.

The plan was for me to pace him. We were going to shoot for 2:30, but race realistically if that didn't seem attainable. I simply planned to stick with the pace group if he was able to keep up. I gave him an idea of how the race would go, the overall pacing strategy, and some nutritional advice, but I decided that as his pacer, I would make sure all of these things happened so he could just focus on running and enjoying his day.

Race day rolled around and there we were, standing in a crowd of hopeful runners. I could tell that his nervousness was already beginning to fade, ever so slightly, with all of the positive energy flowing around at the event. We couldn't hear anything that was being said at the start line because we were so far back, but apparently there was a national anthem sung, and then the race started. I wouldn't have known except for the fact that they usually sing the national anthem, and I also observed that all the heads from way up front were beginning to bob up and down. That meant they were running now.

The wave of head bobbing slowly but surely swept through the field of runners until it got to us. So we followed suit and began slowly trotting forwards. It was several minutes before we actually arrived at the starting line, and I heard all the watches chirp as everybody began keeping track of their official times. The target pace was 11:26/mile, and the plan was to start around 12:00 for the first few miles. The pace group left us behind a little bit, but they were always within sight.

It was a cold morning, but it was clear and the sky was blue. I knew it was going to be a beautiful day once the sun came up. He wore my gloves for awhile, and once his hands warmed up, he gave them back to me so I could wear them. The first few miles were kinda quiet. I believe we were both deep in thought, but I was honestly a little uncomfortable. This was my father, and I was his son, his friend, his pacer, and his "distraction from the pain in his legs". I couldn't think of anything to talk about. This has never been a problem before, but suddenly my father was in my world...sharing it with me for the first time. I think those first few quiet miles I was simply reveling in the fact that this was happening! We eventually began talking about things, but I couldn't tell you what they were. It was just nice to have a chance for some man to man conversation.


After a few miles, our bodies were warmed up, and our muscles had begun utilizing glucose more efficiently, so we raised our pace ever so slightly and rejoined the pace group. I think my father had never done a training run where he started slowly, and he was surprised at how easy his target pace felt after having actually warmed up properly. The pace group leader opted to have the group walk some of the hills to conserve energy, so we followed suit. I will point out that at no point did my father walk out of necessity. I am confident he could have run the entire way without needing to stop and walk.

The last few miles were gently downhill, which was a big mental hurdle out of the way for my father. With how good he felt, our current pace being quite a bit faster than his target, and having actually left the pace group behind, my father at some point Knew that he would finish. The rest was just style points, which I know was important for him. He wanted to finish strong, and a sprint to the finish line seemed just the way to do that. With just over a mile remaining, he dropped the hammer and I proceeded to be astounded to see how much speed this 64 year old man still had in the tank after 12 miles. He ran mile 13 in 9:17. 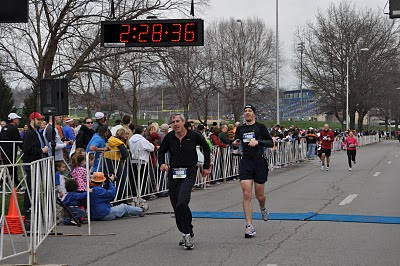 My father and I came within sight of the finish line and we made a break for it. I was happy to see several of my friends along the finish line who were cheering for my dad. We also passed my mother who was cheering as a proud mother and a loving wife. We crossed the finish line at 2:25:49. More than 4 minutes faster than my father's goal. 45 minutes slower than my PR from the same race a year ago, but this was so much more satisfying to me. I got to enjoy inspiring somebody, my own father, to visualize a goal, to believe it possible, and to achieve beyond their expectations. My father got to have a taste of that thing which I have come to crave. Not a legitimate chemical runner's high, but something much more common. Finish lines. What they represent to me, and to many runners, is proof positive that you have accomplished something great. Not to say that my father isn't an accomplished man...far from it. But I'd be willing to bet that a few years ago, he would have never seen himself standing breathless and exhilarated and admiring his ginormous new finisher's medal for a half marathon. I am fairly certain that he learned something new about himself through this entire process, and I'm just glad to have played a small part in his journey.

I am absolutely convinced that this man can finish a full marathon, but I'll leave that up to him...not to say I won't casually mention it from time to time. :-) 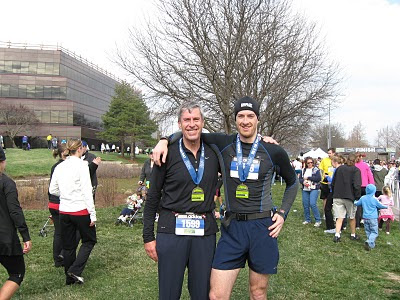 Email ThisBlogThis!Share to TwitterShare to FacebookShare to Pinterest
Labels: running

Other folks who race and write about it