This man picked himself up, lost a ton of weight, and did an Ironman.

Sometimes it takes something like this to convince us that human beings can be amazing.
Posted by Kills Many Bears at 2:00 PM No comments: Links to this post

I noticed something interesting. Aside from when they were brand new, my trail shoes have never been cleaner than they were after 2 weeks of running in snow.

Email ThisBlogThis!Share to TwitterShare to FacebookShare to Pinterest
Labels: observations

Today I will kill the bear... 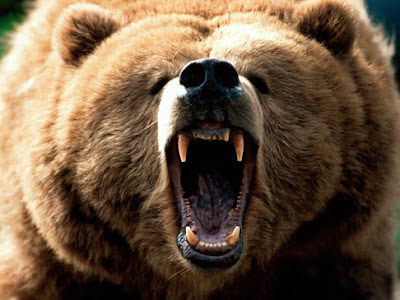 So I decided to create a separate blog dedicated to the athletic side of my life. My other blog will remain for the purposes of my clever(inane) ramblings, silly lists, and metaphorical hoot'n-nannys. Since I started that blog, my audience has grown astronomically...I've got like 10 readers now! This change is partly due to my own desire to keep things separate and organized, but also because I realize some of my readers are here for the race reports and personal suffering extravaganzas, and others read for the dorky stuff. So I now introduce "What One Man Can Do".

This phrase is half of one of my favorite training mantras, "What one man can do, another can do." I totally stole it from this scene in a mediocre/decent movie called "The Edge". I'm not sure it would even be watchable without Sir Anthony Hopkins, but to me the phrase has gone beyond its film-specific meaning. It has taught me to believe that I am capable of doing unbelievably great things. Two years ago, I would have thought an Ironman was impossible, but I did it.(Part 1, Part 2, Part 3, Part 4, Part 5). I would have thought doing an ultramarathon was impossible, but I've done two...Psycho Psummer 50k and Run Toto Run 50k. I've found that writing about these experiences not only helps solidify them in my memory, but it helps me to keep my goals and achievements in perspective and certainly keeps me motivated.

Hopefully I'll have some good stuff to post here very soon. In the meantime, I'll still be posting silly stuff over at the other blog.
Posted by Kills Many Bears at 12:46 PM 1 comment: Links to this post

Other folks who race and write about it